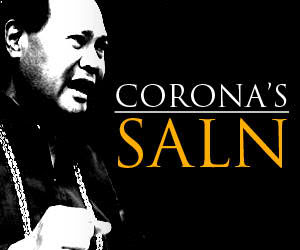 These prime properties were purchased purportedly on installment after Corona was appointed to the Supreme Court in 2002 by then-President Gloria Macapagal Arroyo. His net worth has gone up by P8 million since his appointment to the high court.

Corona's net worth has been rising since 2004, based on his SALNs.

The 2 condominiums in Taguig City are believed to be a unit at Bonifacio Ridge and a unit in Bellagio Tower.

The condominium in Makati is believed to be a unit in The Columns, Ayala Avenue, Makati City.

Corona has admitted to owning a 300-square meter apartment in The Fort, Taguig, and that he has declared this in his SALN "when they acquired it," according to his reply to the impeachment complaint.

He has also admitted to owning 4 other properties from a Land Registration Authority (LRA) list of 45 properties released by House prosecutors last week.

This was Tupas’ initial assessment of the SALNs after these were obtained by the Senate impeachment court.

Supreme Court Chief Justice Renato Corona's net worth jumped from P14.9 million in 2002 to P22.9 million in 2010, according to documents submitted to the impeachment court.

After getting copies of Corona's SALN, House chief prosecutor Rep. Niel Tupas said Corona did not declare 6 supposedly big-ticket properties in his SALN.
Posted by Bloggers Party List at 11:56 PM