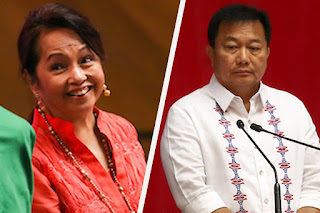 The power shift happened with the knowledge — if not blessing — of President Rodrigo Duterte, who was forced to wait a full hour before delivering his State of the Nation Address (Sona) to a joint session of Congress as the leadership row played out on national television.

When President Rodrigo Duterte arrived at Batasan for his State of the Nation Address (SONA), before 4 pm, it was still Alvarez who welcomed him, along with Senate President Vicente Sotto III.

The President's SONA was delayed for more than an hour since he had to speak separately with Alvarez and Arroyo, according to congressional sources.

An agreement was reached to let Alvarez sit with the President during the speech, and to formalize Arroyo's election as Speaker through a proper resolution.

After the President's SONA, lawmakers stayed to hold a session.

He slapped graft charges against his former bosom buddy, Davao del Norte Rep. Antonio Floirendo Jr., one of the top campaign contributors of the President.

“Everybody had their own issues [with him],” Nograles said. “The zero budget was an issue for some of them, so was the removal of chairmanships from those who voted against the death penalty [bill],” he said.

While Alvarez was making enemies, Arroyo was consolidating her forces.

Of the 184 who voted for her, several were her former Cabinet officials, including Andaya, who was her budget secretary, and Bohol Rep. Arthur Yap, who was her agriculture secretary.

Another close ally is Minority Leader Danilo Suarez, who has joined the new supermajority.

Alvarez did not respond to requests for comment on Tuesday.