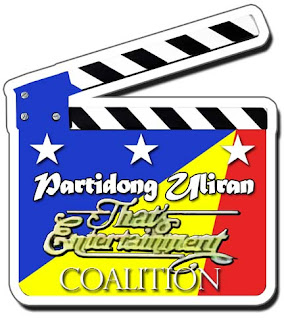 In a press statement earlier today, the Commission on Elections (COMELEC) announced that after an intensive deliberation and debate, they have decided to allow the formation of a new political party for the 2013 National Elections. The decision was unanimous and was thoroughly reviewed by a 5-man committee headed by COMELEC chairman Sixto Brillantes.

“I am proud to announce the formation of Partidong Uliran – That’s Entertainment Coalition (PU-TEC), a star-studded political party that will humbly serve the Filipino people,” said Chairman Emeritus German Moreno.

According to the party’s spokesperson Mariz Rickets, they are still finalizing their senatorial slate for next year’s national elections. She admitted looking at other possible artists from other parties to complete their magic twelve. “Whether you are a kapuso, kapamilya, kapatid, kabarkada, kanews-tv or kaaktv, PU-TEC is the party for you,” she said.

Rickets refused to confirm nor deny reports that they are courting Parañaque City Councilor Alma Moreno, who is running for senator next year under Lakas-CMD (Christian Muslim Democrats).

PU-TEC Vice President Shirley Fuentes revealed that their party is not limited to senatorial candidates only, as the coalition also aims to have congressional, mayoral, and gubernatorial bets for key locations across the country. All from showbiz of course. “Chairman Emeritus Kuya Germs has a political strategy where he will pair famous “love teams” from the past as a city’s Mayoral tandem,” revealed Fuentes. She described it as a win-win plan due to the fact that voters doesn’t want to see only half of a love team, hence they’ll be forced to vote for both.”

PU-TEC Secretary John Nite gave us a few examples of such tandem. Names listed below are for Mayor and Vice Mayor respectively:

Not to be outdone with the current administration’s Samar & Balay group, PU-TEC would also be comprised of not one, not two, but five groups in total. “Groupings are to be determined by their expertise and appeal”, said President Jackie Lou Blanco. She was quick to point out that the five groups would be working together and not try to outdo each other.
.
Chairman Emeritus Kuya Germs expressed optimism with the launch of his new party, saying that “this is a huge success for Philippine show business politics.”
.
When asked whether talent manager Annabelle Rama will join their party, Moreno was quick to point out that she is welcomed to do so. ”Syempre, bukas ang ating pintuan para sa kanya (Of course, our doors are open for her to join)”, said Kuya Germs. “Pero baka sa ibang group natin sya iassign, basta wag lang Thursday group  (But we might assign her to a different group, just as long as it’s not Thursday group).”

When asked to explain, he revealed that Nadia Montenegro, who is planning to run for office in her province; is already assigned to the Thursday group and assigning Rama to the same group might cause problems in the future. “Puwede siguro si Annabelle sa Monday group, katulad ng anak nyang si Ruffa dati ( Monday group might be suitable for Annabelle, as i i’s the same group as her daughter, Ruffa before).”
.
Kuya Germs admitted that he was saddened when Manila Vice Mayor Isko Moreno joined Vice President Jejomar Binay and Former President Joseph Estrada”s United Nationalist Alliance (UNA) earlier this month. He clarified though that there was no bad blood between them.
.
Instead, the 68-year-old TV host turned political leader revealed that he is  grooming actor Jake Vargas to be the running mate of Maria Leonora Teresa Cabaltera Aunor, or more popularly known as THE Superstar, Nora Aunor, for the 2016′s presidential elections.