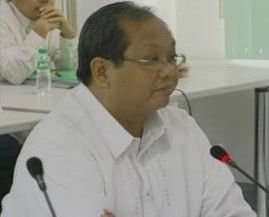 Puno has said he can work with Roxas, but can Mar work with Rico? Guess who may be behind the sordid tales being peddled against Puno?

While Interior and Local Government Undersecretary Rico Puno is definitely a colorful character in the otherwise staid and conservative cabinet of PNoy, the conspiracy theories being floated against Puno are just too outlandish to be taken at face value. This is especially so, because it is a media conglomerate identified with newly appointed DILG Secretary Mar Roxas that broke the incredible story of a “break-in” allegedly engineered by Usec Rico.

Apparently, according to the scuttlebutt, Usec Rico, accompanied by officials and personnel of the Philippine National Police (PNP) were poised to “ransack” the offices of the late Jesse Robredo two days after the latter’s plane crashed.

Earlier, Roxas himself set the rumor mill spinning when he “revealed” that the late DILG Secretary was secretly investigating Puno before Robredo’s plane crashed. The rumor mill then wondered whether Puno himself may have had something to do with the crash.

Putting one and one together, the insinuation is that Puno wanted Robredo out so that Usec Rico could take his place. Not only that but that Usec Rico also wanted to find the documents in Robredo’s offices and condominium unit that allegedly incriminated Usec Rico Puno.

One wonders if Usec Rico was amongst those identified by Sec Mar’s one and only, as among the “mga maliliit at maiitim na maligno” who wished the worst on Jesse Robredo.

Are we living a Robert Ludlum or Ian Fleming book or watching a Jason Bourne of James Bond movie in full color?

As undersecretary of the DILG, wasn’t Puno duty bound to secure the sensitive papers of the department after the crash? Wouldn’t he have been derelict in his duties had he not done so? What if anything went missing? Wouldn’t Puno then be damned for not securing these?

If the intention were to “ransack” as insinuated by the TV station which employs Roxas’ wife Korina Sanchez, why would Usec Puno bring along officials and personnel of the Philippine National Police? Why would the policemen even contact the lawyer of Robredo in the course of securing Jesse’s papers?

In fact, as reported by other media, Puno, Usec. Austere Panadero and PNP chief Nicanor Bartolome “agreed to secure the offices of Robredo” on the personal order of President Noynoy Aquino.

Justice Secretary Leila de Lima also denied knowing of any attempt by Puno and his group to engineer an illegal “break-in” of the offices of Robredo at the DILG and the National Police Commission and his condo unit.

De Lima, who secured Robredo’s papers, was reported to have said that everything was in order before turning over the documents to Executive Secretary Paquito Ochoa who took over Robredo’s post in an acting capacity.

Can we blame the hapless Puno for the crash? Hardly.

Robredo had earlier booked a commercial flight for Manila. Robredo made a spur-of-the-moment decision to charter the ill-fated plane to fly direct to Naga City from Cebu. How does one plan a plane sabotage on such short notice?
Posted by Bloggers Party List at 4:55 PM No comments: