An overwhelming majority of Senators, 20-3, voted for the removal of Corona from office, most of them noting that the top magistrate no longer deserves his post. This makes Corona the first government official to be convicted by an impeachment court. 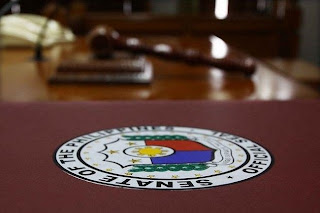 "The Senate, sitting as an impeachment court, having tried Chief Justice Renato Corona, upon three articles of impeachment charged against him by the House of Representatives, by a guilty vote of 20 senators, has found him guilty of the charge under Article II.

"Now therefore, be it adjudged that Renato Corona, is hereby convicted of the charge against him in Article II of the Articles of impeachment, so ordered," Enrile added.

Enrile also said as he explained his vote, "there is deliberate act of excluding substantial assets."

"This is not justice, political or legal. Certainly not the law..it is only naked power, as it was in 1972," however said Arroyo as he defended his vote.

Each senator was given two minutes to explain their votes while as presiding officer, Senate President Juan Ponce Enrile was last to vote.

Corona was impeached by the House of Representatives in December after 188 congressmen signed the impeachment complaint.

From the original eight, the prosecution team reduced its complaint to three articles of impeachment.
Posted by Bloggers Party List at 4:12 AM No comments: 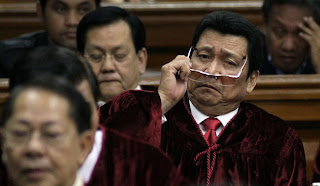 Enrile said he picked Lapid’s speech as his favorite because it was “very simple.”

“Lito Lapid. Very simple. He believed in Rudy Farinas. You must give credit to Rudy, the way he exposed the issues, very graphic, very simple. It could be understood by the hoi polloi,” the senate president said in an interview with ANC on Wednesday.

Who needs highfalutin words and legalese? Because for Senate President Juan Ponce Enrile, it was Senator Lito Lapid who delivered the best explanation of vote in the impeachment trial of Chief Justice Renato Corona.

Lapid was among the 20 senators who voted for Corona’s conviction. He was the only one who had no speech prepared.

The action star-turned-politican has long been criticized for his inability to speak straight English. He is however a favorite by the masses.

And like Lapid, Enrile said it was prosecutor Ilocos Norte Rep. Rudy Farinas who convinced him that Corona is guilty of the charges.

Farinas presented the alleged inaccuracies of Corona’s testimonies during the closing argument of the prosecution team.

Lapid was one of the most anticipated senators on Tuesday as his name trended on social networking sites even before it was his turn to explain his vote.
Posted by Bloggers Party List at 4:04 AM 1 comment: 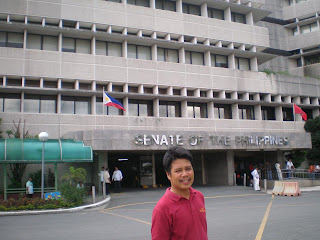 Anyway, below is a full script of what has happened on todays CJ Corona Impeachment Trial May 22, 2012. It’s quite long, but it is time stamped.

CJ Corona has finally appeared and took the trial stand today, May 22, 2012. CJ Corona had a long introduction and opening statement just to say he is not guilty. Unfortunately, at around 5 PM, he signed a waiver to waive his right of Secrecy of Bank Deposits, allowing the banks to disclose all his assets both foreign and local.

Renato Corona, the Chief Justice of the Supreme Court of the Philippines was impeached on December 12, 2011. Corona was the third official, after President Joseph Estrada on 2000 and Ombudsman Merceditas Gutierrez earlier on 2011, to be impeached by the House of Representatives.

Corona was perceived as an ally of former president Gloria Macapagal-Arroyo, who had appointed him as chief justice of the Supreme Court, days after the 2010 presidential election. This comes after the Supreme Court ruled that the president's ban on appointments does not extend to the judiciary. Since then, the Supreme Court has been accused of ruling unfavorably of the Aquino administration in cases concerning Arroyo.

The Senate, which had already convened as an impeachment court, began the trial on January 16, 2012. This is the second impeachment trial in the history of the Philippines, as Gutierrez resigned prior to the trial.

Chief Justice of the Supreme Court Reynato Puno was to retire on May 17, 2010, seven days after the presidential election; however, the constitution prohibits the president from appointing anyone two months before the presidential election up to the end of the term. This caused a suit to be brought to the court, in which the court ruled on March 17, 2010, that the ban on appointments does not cover the judiciary. The court ruled with finality on April 20, 2010, with nine justices concurring, one dissenting, three inhibiting and two dismissing the case for being premature. This caused the Judicial and Bar Council (JBC), the body that recommends nominees to the president, to resume its sessions in determining the list to be submitted.

Renato Corona was appointed Chief Justice of the Supreme Court on May 12, 2010. In a statement, the executive said that among the nominees submitted by the JBC, Corona was the "most senior Supreme Court justice".

With Benigno Aquino III winning the election, he invited all heads of the three branches of government to his inauguration, although instead of the tradition of him being inaugurated by the Chief Justice, he instead chose to be sworn in by Associate Justice Conchita Carpio-Morales, the sole dissenter on the case.

At the first few months of Aquino's presidency, he consolidated power by removing government officials closely associated with the Arroyo administration. Ombudsman Merceditas Gutierrez, who can not be simply removed from office, was impeached by the House of Representatives on March 22, 2011; the Senate was set to begin the second impeachment trial in history when she resigned on April 29, 2011.[4] Aquino announced the appointment of retired Supreme Court Associate Justice Conchita Carpio-Morales as the new Ombudsman to replace Gutierrez on his 2011 State of the Nation Address.

On December 6, 2011, at the National Criminal Justice Summit at the Manila Hotel, Aquino said in a speech that Corona, who was seated meters away from him, is beholden to Arroyo. Aquino questioned the court's granting of a temporary restraining order lifting the watch list order of the Department of Justice against Arroyo, Arroyo's midnight appointment of Corona, and the ruling of Camarines Sur's two new legislative districts as constitutional despite falling short of the required population set by the constitution.

On the December 12, 2011 flag-raising ceremony at the Supreme Court, Corona revealed that there was "a secret plan to oust me from office by any means, fair or foul." Corona said that he would not resign.

Later in the day, a caucus amongst Aquino's allies in the House of Representative was called. Minority leader Edcel Lagman said that discussion amongst Aquino's allies heightened when the Committee on Justice passed an impeachment case involving Associate Justice Mariano del Castillo on his alleged plagiarism. Lagman further said that if the vote passed, he would question its "legal and factual basis.". The deputy presidential spokesperson, on the other hand, stated that the Palace "is not privy to the discussions of the Liberal Party in the House."

At the conclusion of majority bloc's caucus, Committee on Justice chairman Niel Tupas, Jr. presented the impeachment complaint; after the presentation, only two representatives asked for more questions, while an overwhelming majority asked to sign the complaint. He said that there were no instructions from the Palace to impeach Corona, nor was the pork barrel of representatives who did not sign would be held back, but he said that he informed the president of their decision to impeach Corona, and that the president supported it. The House of Representatives then voted in session to endorse the complaint, getting 188 votes, well above the one-third (95) of the members required by the constitution.

Navotas representative Toby Tiangco resigned from the majority bloc, and the chairmanship of the Committee on Metro Manila development, after the impeachment was passed by the House of Representatives. Tiangco said that the complaint was approved without the members of Congress scrutinizing it. Batangas 2nd district representative Hermilando Mandanas, who did not sign the complaint, was relieved of the chairmanship of the Committee on Ways and Means. Mandanas quoted Speaker Feliciano Belmonte, Jr. on saying that the Aquino administration wanted his removal. The majority bloc was not surprised with Tiangco's resignation from the majority, with Majority Leader Neptali Gonzales II describing Tiangco as a "maverick" and has "more than many times identified himself with the minority."
Posted by Bloggers Party List at 10:24 PM No comments: