Corona Impeachment, a waste of time and effort 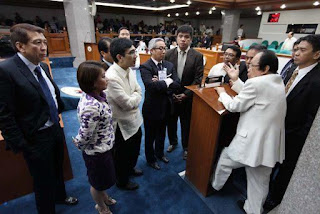 It was unrealistic to have expected the 2001 Senate to remove Pres. Joseph Estrada at his impeachment trial even had the senate majority voted to open the envelope that would have revealed the amount (P3.2 billion) that Estrada (aka “Jose Velarde”) kept in his Equitable Bank accounts. It is not realistic now in the trial of Corona even had the Senate majority voted to ignore the TRO of the Supreme Court and subpoenaed Corona’s dollar accounts in the Pilipino Savings Bank.

It would be unrealistic even if the Senate were to accept all the evidence of Renato Corona’s ownership of 24 pieces of real property, including the luxurious Bellagio penthouse condo, as well as tens of millions of Philippine pesos (and at least $700,000) in his bank accounts and even if it was established that Corona, a tax law specialist, evaded paying taxes on all his unreported income and assets.

The reality is that facts don’t matter in a system where 16 senators are needed to vote in favor of removing the impeached public official, which is twice the burden of the defense which needs only to convince 8 senators to vote against removal for whatever expedient reason they may choose.

Since there are only 23 senators (after Sen. Benigno Aquino III was elected president in 2010), 8 senators voting against removing Corona would mean only 15 left to vote for his removal, which would not be sufficient, as a 2/3rds super majority of 16 is needed to remove an impeached official.

The basic problem with the whole senate impeachment process is not just the arithmetic but the composition of the jury. The senator-jurors are all politicians, who are naturally motivated by political considerations, not by lofty notions of truth and justice. These senate-jurors don’t even have a set of jury instructions to ignore.

Besides, if truth be told, many of these senators are guilty of the same charges that have been leveled against Corona. Who among them has not received unreported sums — some of which may also have been deposited in dollar accounts — from benefactors who seek favors from them? Who among them has truthfully listed all their assets in their SALNs? If they vote to remove Corona on charges that they themselves are also guilty of, then they would be just knotting their own nooses.

While some of them may nevertheless vote against their own self-interests and according to the dictates of their conscience, most will surely not.

Some may vote to remove Corona, not because his removal would advance good governance, but because they may expect favors from the President, perhaps support when they run for re-election in 2013 or appointment to a cabinet post.

But most will likely succumb to the influence of the major forces actively lobbying for the political acquittal of Corona.

Foremost among them is former Pres. Gloria Macapagal-Arroyo (GMA) who sees Corona as her main hope to avoid incarceration for corruption. Corona proved his loyalty to her when he abruptly cut short his vacation in San Francisco last November to rush back to mobilize a majority of Arroyo-appointed Supreme Court (SC) justices to grant a TRO that would have allowed GMA to leave the Philippines and avoid incarceration. This same SC majority can be counted on in the future to dismiss the charges against GMA and to allow her to leave the Philippines.

At a recent cabinet meeting, Pres. Aquino said that a Supreme Court without Corona ensures a conviction and a long jail term for GMA. And GMA knows this to be true. If the former First Couple accumulated billions of pesos/dollars while in office as the government alleges, then surely dispensing a few million pesos/dollars to a few grateful senators will be well worth the cost. After all, how can GMA enjoy her billions in Bilibid Prison?

While the INC endorsed Aquino in the 2010 presidential elections, the INC was greatly disappointed when Aquino sacked former National Bureau of Investigation (NBI) Director Magtanggol Gatdula, an INC member, for his involvement in the abduction of a Japanese tourist wanted by the Yakuza. The INC wants Aquino to apologize to Gatdula and reinstate him in his post.

It should also be noted that many of the senator-jurors won their seats because they were endorsed by the unified voting bloc of the INC and they can ignore the INC’s wishes only at their political peril.

While the INC has endorsed the Reproductive Health (RH) bill backed by Pres. Aquino, the other force supporting Corona is the Philippine Catholic Church which is staunchly opposed to the RH bill and whose bishops have threatened Aquino and RH backers with excommunication.

The other group furiously lobbying for Corona’s acquittal is the Integrated Bar of the Philippines (IBP) headed by Roan Libarios. Even though five former IBP presidents have endorsed the impeachment of Corona, Libarios has called the impeachment of Corona “improper and inappropriate.” The IBP recently lauded Senate President Juan Ponce-Enrile for his support of “the rule of law”. Many of these IBP lawyers have cases pending in the Supreme Court and believe that expressing support for the CJ will benefit them and their clients.

An IBP stalwart, Atty. Judd “The Dean” Roy, is one of the lawyers defending Corona. On February 2, he tweeted that “Honasan and Estrada stick the dagger into Tupas throat. Nicely done, guys.” On February 13, he tweeted about the head of the House prosecution panel: “Idiot Tupas, just one of those guys you love to keep f—ing over and over again.”

Probably the most influential of the “interest groups” lobbying the senators to acquit Corona is the group of unnamed beneficiaries of Corona’s Supreme Court decisions. Likely included in this group is Lucio Tan, owner of the Philippine Airlines (PAL), who gave Corona free Platinum Card tickets to fly with his wife to various cities while the case of PAL flight attendants against PAL was pending in the Supreme Court.

Also likely included is Eduardo “Danding” Cojuangco, the beneficiary of a Corona Supreme Court decision that declared that he was not a crony of Ferdinand Marcos, a decision then Supreme Court Justice (now Ombudsman) Conchita Carpio-Morales dissented from and called the “biggest joke of the century”. It was a decision that allowed Cojuangco to maintain his majority control of San Miguel Corporation, a decision worth billions for Cojuangco.

Many members of this interest group have invested heavily in Corona and would not wish to see their investments go down the drain. Since many of them also fund the election campaigns of many of the senators, they exert considerable influence over the votes of their senators.

Also joining them will be: Francis “Chiz” Escudero, Loren Legarda, and Ralph Recto. And if his vote is needed, the trial’s presiding officer, Juan “Manong Johnny” Ponce-Enrile. And there may even be four more senators.

People eat their hotdogs and their spam without really caring to know what goes into them. But when people learn of all the toxic ingredients that actually go into the food they eat, people will care and will do something about it. The same is true with the toothpaste of information that has been released to the public by the televised trial. No matter what Corona and his supporters may do in the future, they simply cannot return the toothpaste back into the tube or excise the damaging testimonies from YouTube.
Posted by Bloggers Party List at 9:20 PM