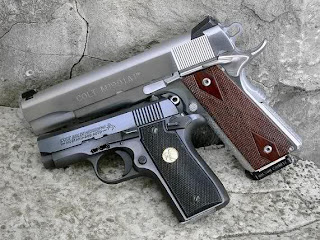 It turns out, according to PNP records, that Corona has owned not just one gun but a veritable personal armory, from revolvers to high-powered machine guns, and even a vintage Winchester, the kind popularized by American cowboys in the 19th century.

Family dispute The alleged physical threat by Corona was first mentioned by Ana Basa, a first cousin of his wife, who described in detail to the Philippine Daily Inquirer this week how the Corona couple allegedly cheated the rest of the clan of collectively owned property and other assets.

Corona claimed that the millions in cash that he had in bank accounts revealed during his impeachment trial were proceeds from the sale of family property, which Ana Basa said was a surprise to the rest of the Basa clan. In the Inquirer story, Ana Basa said her clan had long been asking her cousin, Mrs. Corona, for an accounting of the properties. Mrs. Corona was the administrator of the family properties under the corporation Basa-Guidote Enterprises Inc. set up by her grandparents in 1961.

One of those properties was a lot in Sampaloc, Manila, where the family caretaker Aguilon maintained a small home. Aguilon stated in his affidavit that the Corona couple had his home demolished without warning in January 1997, and Renato Corona, then a presidential legal counsel in the administration of then-President Fidel Ramos, pointed a gun at him while saying,

While denying that he pointed a gun at a property caretaker, Chief Justice Renato Corona admitted that he owned a gun. PNP records, however, showed he has owned at least 31 firearms, including an Uzi and a vintage Winchester popularized by American cowboys in the 19th century.

The chief magistrate has had a total of 31 firearms under his name since 1997. These include 18 pistols,

two machine pistols, two shotguns, one submachinegun, one high-powered rifle, and a carbine. Among these are an Uzi, a Beretta, and a Glock, all leading gun brands.

transferred to other entities. Sought for comment about Corona's guns, lawyer Ramon Esguerra, the magistrate's legal counsel in the ongoing Senate impeachment trial, told GMA News Online in a text message that he was "not aware" of the firearms that his client has owned over the years. In a long-running family feud between Mrs. Corona and her cousins and mother's siblings, Chief Justice Corona has been accused of using his influence with judges and even of terrorizing other clan members and their workers, such as what allegedly occurred to Mr. Aguilon.

In the same interview, Corona admitted owning a firearm, but quickly added:

A summary of Renato Corona's 31 guns with corresponding serial numbers, according to the PNP: