The recent “arrest” and booking of former President and now Pampanga Rep. Gloria Macapagal-Arroyo in St. Luke’s hospital is a reminder that life is indeed like a wheel—sometimes we are on top, other times on the bottom. Her arrest should remind us of former President Joseph Estrada who was arrested, booked, convicted, but pardoned before he could spend a day in a real jail. Erap is quoted to have described the experience as “weather-weather lang” (from the Filipino “pana-panahon lang”). Former First Lady and now Ilocos Rep. Imelda Marcos used to comment on the flood of charges brought against her, saying she faced almost 400 court cases—more than all her fingers and toes, more than the days in a calendar year. She too has not spent a day in jail.

We go through life and see these historical reminders but rarely notice then. Take our currency, do we look closely at the designs of our coins and banknotes? Don’t these represent our past, our culture, our identity? Open your wallet and pull out banknotes, old and new. Look at the faces and scenes printed on them and you are treated to a review of recent political history that should lead us to reflect on the GMA arrest and the Latin phrase “Sic transit gloria mundi (Thus passes the glory of the world).” 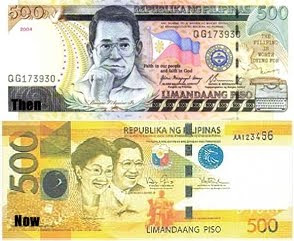 In 1987, Bangko Sentral ng Pilipinas issued a new denomination banknote—P500—in yellow, a celebration of the color of people’s protest against two decades under Ferdinand Marcos, a celebration of Cory Aquino and People Power. The logical choice for the portrait on the P500 bill was Benigno “Ninoy” S. Aquino Jr., martyred husband of then President Cory. Compared to previous notes the P500 bill was a breath of fresh air in terms of design and color, until feng shui experts focused on details they deemed inauspicious. Ninoy had his chin resting on his fist, and so the country’s economic woes were blamed on his brooding portrait. If Ninoy were made to smile like a pot-bellied Buddha, the P500 bill would bring good fortune and prosperity to the nation, it was said.

Signatures were collected and a petition sent to the BSP governor by a group that called itself Pangitiin si Ninoy Movement (Make Ninoy Smile Movement). The BSP ignored the petition. BSP officials were reminded of a little-known Civil Service Commission regulation that states that if a citizen sends a written request to a government official, he deserves a written reply within 15 days. Failure to reply could be the basis for a formal complaint lodged with the CSC or the Office of the Ombudsman.

With the exception of Josefa Llanes Escoda who smiles at us from the P1,000 bill, everyone is stiff and formal: Quezon, Osmeña, Roxas, Macapagal, Ninoy. Even Jose Abad Santos and Vicente Lim, who share the space with Escoda in the P1,000 bill, are not smiling. The BSP solved the issue raised by the Pangitiin si Ninoy Movement with the new-generation currency launched at the end of 2010. Ninoy has been joined by Cory on the P500 bill and both of them are smiling so widely that you can see their gums (kita na ang gilagid). Furthermore, it is significant that we have one family on the new P500 bill: the son of Cory and Ninoy happens to be the sitting President of the Philippines so the scrawl of Benigno “Noynoy” S. Aquino III can be seen beside that of the BSP governor’s as the government guarantee or promise to pay the bearer with the amount printed. The operative words on the banknotes read: “Ang salaping ito ay bayarin ng Bangko Sentral [ng Pilipinas] at pinanagutan ng Republika ng Pilipinas” (This money is payable by the Central Bank [of the Philippines] and guaranteed by the Republic of the Philippines.) With its updated design and enhanced security features, people say in jest that the only images lacking in the new P500 bill are those of P-Noy’s sisters. These people suggest that to complete the picture, it should have Kris Aquino together with her sons Josh and Baby James.

The first banknotes series issued by the Central Bank in 1951 had nine denominations, most of them bearing the portraits of 19th century heroes of Philippine independence: P1-Apolinario Mabini, P2-Jose Rizal, P5-Marcelo H. del Pilar and Graciano Lopez Jaena, P10-Frs. Gomez, Burgos and Zamora, P20-Andres Bonifacio and Emilio Jacinto, P50-Juan Luna. There was only one woman, Melchora Aquino, a.k.a Tandang Sora, on P100, and there were two 20th century politicians, Manuel Quezon on the P200 and Manuel Roxas on P500. The 19th century heroes have fallen by the wayside or have been relegated to coins such that the 2010 banknotes are dominated by 20th century politicians, with the notable exception of the P1,000 bill which bears the portraits of heroes of the Japanese occupation. Quezon and Roxas have been on our banknotes since 1951.